As you evaluate financing alternatives to launch your new product, you should consider crowdfunding because it offers some real benefits over the more traditional fundraising methods.  Traditionally most entrepreneurs rely on their own personal savings and friends and family finance their startups.  In some rare instances they are also able to get funding from banks, Angel Investors and Venture Capitalists.  Crowdfunding builds on friends and family by taking advantage of social networking opportunities to expand your audience and hopefully increase your backers.

The two most popular types of crowdfunding are based on rewards and equity. Rewards based crowdfunding gives you the ability to collect small amounts of money from a large network of potential backers in return for offering a reward, like a pre-sale unit, t-shirt or free app download once it is launched.  Equity based crowdfunding is similar in the fact that you are getting investments from a network of people, but in this case you are selling them a piece of your company as opposed to giving them a reward. 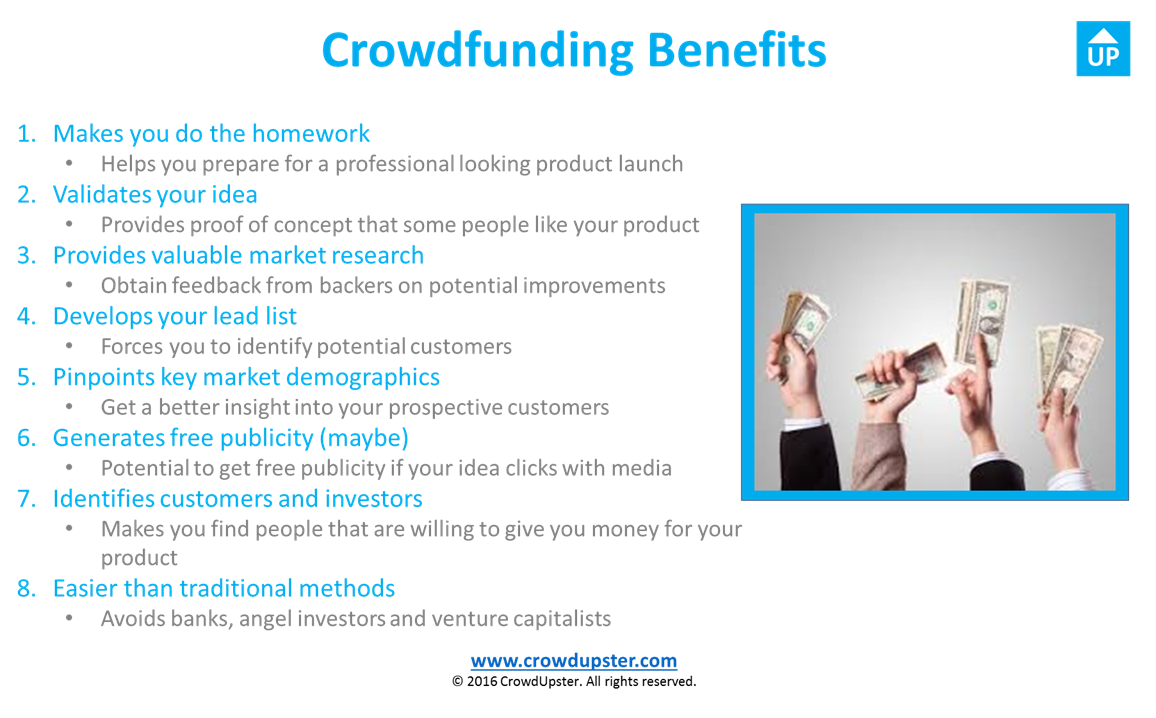 Regardless of whether you choose rewards or equity crowdfunding, they both offer benefits that you should consider to finance your project or business.   Listed below are 8 benefits of crowdfunding.

1. Makes you do the homework

In order to launch a crowdfunding campaign you need to do lots of homework and preparation in order to sell your idea and get people to buy-in.   If you explore some of the popular crowdfunding sites like Kickstarter and Indiegogo you will see that people have put a lot of thought into their products.  These entrepreneurs have created prototypes, made videos, established funding levels and associated rewards, set-up websites and created social media networks.   If you want to run a successful crowdfunding campaign, then you will also need to do all of this prior to asking for any money for your project

Once you have done all your homework and developed a professional presentation for your project, it’s time to show it off on a crowdfunding platform.  If you have developed a compelling sales pitch and established a realistic funding goal, then the crowd will tell you what they think by voting with their wallets.  You can consider your idea a good one if you meet or beat your funding goal in the appropriate timeframe.  On the other hand, if you don’t meet your fundraising goal then it may be time to reconsider what you are doing.  Although it’s possible that you just didn’t get enough visibility for your project or your social network isn’t big enough, it’s more likely that your idea isn’t that good and will need some rework.

In addition to validating your idea in general, you can also get valuable feedback to use after you launch.  Most crowdfunding platforms allow potential backers to leave comments about your proposed product and you can use this a valuable market research in the future.  For instance, if your initial version is going to be in “black” only, you may get comments that ask for it in “green.”  After you launch the “black” version, then you can move ahead with a “green” version in the future.

In order to launch a successful crowdfunding campaign, you need to start with a list of potential people that would be interested in your big idea.  Nowadays the best place to start is with your social media connections on Twitter, Facebook, Instagram, LinkedIn and all the rest.  At some point prior to- and during your crowdfunding campaign you should let all of these people know what you are up to and encourage them to support your project and provide feedback.  These connections will form the beginning of your lead list and you will add to it as your crowdfunding campaign progresses.  Once you have created a good list you can use it over and over to provide updates and let them know what is coming in the future.

As your crowdfunding campaign progresses you should be able to verify your assumptions around key demographics of your backers and maybe even identify some new ones.  For instance, if you are planning to launch a new iPhone App for college aged millennials, then determine if millennials are actually funding your campaign by asking a few questions.  Maybe you can include a survey about which school they are attending, or how long ago did they graduate from college.  Try and determine if they are male or female.  The trick here is to get as much information as possible without turning people off because you are asking for too much information.  So limit your “ask” as much as possible and try to get only what need.  You can also do a much more in depth survey by asking some of your backers to participate in a more detailed survey or focus group.

As with any almost anything in life, there are always some people and things that get all of the attention.  If you are Donald Trump or Oprah, then you are naturally going to get a lot of attention from the media and with it a lot of free publicity.  The same goes for movies, music, art and so on.  There is always a movie, song or picture that gets a lot of free publicity because it is so good (or sometimes so bad) while all the others struggle just to get noticed.  It’s exactly the same in crowdfunding.  There will be some projects that get mentioned on Twitter more than 100,000 times and get 5,000 likes on Facebook, and maybe even covered by the national news media.  Those projects are rare.  In fact, when you decide to launch a crowdfunding campaign, you will receive numerous solicitations to help your project get noticed – all for a fee of course.  So while you may get some free publicity, don’t count on it.

Once you remove your parents, siblings and best friends from your lead list, then almost anyone else that backs your crowdfunding campaign has a real interest in your product and wants you to succeed.  Not that your friends and family don’t matter, but their bias doesn’t reflect the real world.  Your crowdfunding campaign will identify people beyond your core group that will want to buy your product and may become loyal customers over time.  This is the most important aspect of any business – being able to find buyers and creating something that they want to buy.  Without those two things any business is doomed to failure.

Until recently, the more traditional ways to raise money for your startup included applying for a bank loan or pitching angel investors and venture capitalists for an investment.   Although these funding sources are still alive and doing well (just watch an episode of Shark Tank or read the latest news about Silicon Valley) they are more difficult to tap than the investors you can reach through a crowdfunding campaign.  Banks are difficult because they want to sure that they money they loan you is going to get paid back with interest. So banks are not really going to take a risk on a new business idea that doesn’t have a history of sales and profits.  Angel investors and venture capitalists on the other hand expect that many of their investments will fail, but in return are looking for a big score (think Uber, Facebook or Apple).  So if you can’t demonstrate how your idea is going to be a big business in the next few years, it’s unlikely they will be interested in funding your project.