Denver based startup Antsy Labs launched a super successful Kickstarter crowdfunding campaign for its desk toy called Fidget Cube.  Designed for restless individuals, Fidget Cube allows someone to release their nervous energy using their fingers.  The Fidget Cube is shaped like dice, but instead of having numbers on all six of its cubic sides, there are things that can be clicked and pushed by someone’s fingers while they are holding it in their hand. 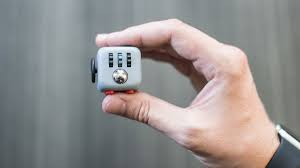 Although the creators of Fidget Cube, Matthew and Mark McLachlan, call it a desk toy, it can be used practically anywhere that someone might be fidgeting – like a train, plane, car, in a meeting, while studying or simply watching television.

Featured on each of the six sides of the Fidget Cube are one of the following:

The Fidget Cube is made of vinyl and measures 1.3 inches which does not include the protrusion of the fidgety devices on each side.  Its weight is estimated at 1.4 ounces, but may be slightly heavier when it is shipped.

Backers of the crowdfunding campaign can get the Fidget Cube in multiple colors, including graphite, midnight, sunset, aqua, berry, fresh, retro and backer designed.

People that are nervous, agitated or even bored have a tendency to fidget by playing with their hair, fingers, clothes, or bouncing their leg.  Studies have shown that children who fidget using their hands had superior learning and memory, and those with ADHD can focus on what’s important. That’s where the Fidget Cube fits in.  It allows users to channel their nervous energy using their fingers and the different sides of the cube to fidget or fiddle and improve their concentration.

In addition to Fidget Cubes, there are a wide variety of other devices to help people improve their concentration through fidgeting.  Some of these devices include stress balls, finger springs, squeeze balls, chewy bracelets, massage balls and putty.  What makes the Fidget Cube unique is that it offers six different ways to fidget with fingers in a single device.

Antsy Labs began a crowdfunding campaign for its Fidget Cube on August 30, 2016 with a funding goal of $15,000.  As of today, with still 12 days to go, this startup has raised nearly $6 million!  That’s quite an accomplishment and will surely place Antsy Labs and Fidget Cube as one of the most funded Kickstarter campaigns ever – it is already shown as being number 13 on the most funded list.  It only has a short way to go to beat out the Veronica Mars movie and Mystery Science Theater 3000 television show crowdfunding campaigns.

Early bird backers of Fidget Cube will get one for $14, or $11 off the expected retail price of $25.  Other early backers were able to pledge $19 and still save $6 off the retail price – and it appears that this option is still available.  Antsy Labs also offers many other rewards levels that include:

According the reward level descriptions, Fidget cubes can be shipped to anywhere in the world.

Most Kickstarter projects that are as successful as the Fidget Cube offer stretch goals to enhance the product and further reward their backers, and Antsy Labs is no different.   The company established a few stretch goals that include the following:

Any startup like Antsy Labs that is fortunate enough to have such a successful fundraising campaign on Kickstarter is bound to face several challenges.  Fortunately they seemed to have recognized these at the outset, and have begun to make some changes in strategy.

One of the most obvious challenges Antsy faces is shipping all of the Fidget Cubes to the right people and addresses.  With an initial fundraising goal of $15,000, Antsy Labs only expected to ship a few thousand Fidget Cubes.  As noted in an update, they had originally planned to fulfill orders personally while sharing pizzas.  Now, with the expectation of having to ship hundreds of thousands of Fidget Cubes to their more than 100,000 backers they will need help fulfilling all of those orders at an added expense.

Another challenge is meeting the December deadline.  Many of the reward tiers specified that backers could expect delivery by December 2016.  However, if the Fidget Cube manufacturer was only planning on a small production run before the end of the year, then Antsy Labs has had to scramble to find more manufacturing capacity to manufacture the additional units.

Lastly, it’s apparent that the company is struggling to keep up with all of the comments being posted.    In reading through the comments, some of the key concerns and questions fall into the following categories:

What’s really interesting is that some of the Fidget Cube superbackers have started answering questions on behalf of Antsy Labs.

Matthew McLachlan and Mark McLachlan, founders of Antsy Labs, have some previous experience with Kickstarter crowdfunding campaigns.   Prior to launching Fidget Cubes, the McLachlan brothers started four other Kickstarter campaigns.  Their first campaign was for a book titled “Bright Ideas,” that would tell the story of successful crowdfunding campaigns and what the founders went through to get the projects launched.  This project was not successful and was cancelled in November 2012.

Their next effort was for a tabletop game called “Storm the Gate.”  The game was made from high quality wood and looks similar to a backgammon board game, except there is a whole in the middle and rubber bands on either end.  The object of the game is to shoot small checker sized piece through the hole in the middle of the board using the rubber band.  Whoever gets all their pieces to the other side first wins the game.  This project successfully raised $10,000 on a $6,000 funding goal and was fully funded in March 2013.

After Storm the Gate, the McLachlan’s moved in a totally different direction and came up with a charging station that accommodates an iPhone and an Apple watch simultaneously.  Made from high quality machined aluminum, it was designed to stay firmly in place while charging Apple products.  Called the Duet, this project raised $51,026 from 502 backers and was successfully funded on June 8, 2015.

The Duet was quickly followed by the Trio, which began crowdfunding in December 2015.  Like the Duo, the Trio was a charging station for Apple products, but this one also had an additional space for an iPad.  Additionally the Trio was created to accommodate other products as well, like a Pebble Time watch, any tablet with a lightning port, or a smartphones with different ports.  Funding for this project was cancelled after only raising $9,737 of a $25,000 goal.

Fidget Cube is in Some Pretty Famous Company Now

While it is unlikely that the Fidget Cube will surpass either the $20 million raised by the Pebble Time smartwatch, or the $13 million raised by Coolest Cooler, the Antsy Labs teams should be very proud of its accomplishment to date.  What makes the Fidget Cube story so intriguing is that conceptually it is a much simpler device to develop and manufacture than either the Pebble Time watch or the Coolest Cooler.