Crowdfunding involves collecting “small” amounts of money from many individuals (the crowd) to fund a project or business.  Today crowdfunding is typically associated with online platforms like Kickstarter and Indiegogo, but the history of crowdfunding can be traced back in history to other fundraising activities, like erecting the Statue of Liberty.

In 1885 Joseph Pulitzer, a newspaper publisher, started a crowdfunding campaign to raise money for the base of the Statue of Liberty because both the State of New York and United States Congress refused to do so.  In exchange for donations, Pulitzer printed the name of every contributor (no matter what amount they gave) in his New York World publication.   Pulitzer’s crowdfunding campaign raised more than enough money in less than 6 months from 125,000 contributors to complete the pedestal.

More recently, crowdfunding has been used by musicians to fund albums, writers to fund books, producers to fund movies, and entrepreneurs to fund technology startups.  Nowadays new crowdfunding campaigns are launched on a daily basis and the opportunities being funded seem almost limitless.

Prior to the widespread adoption of crowdfunding, most new business ideas were funded through personal savings, family and friends, banks, angel investors and venture capitalists.   While crowdfunding has not replaced any of these traditional methods of fundraising, it has made it easier than trying to get money from banks and professional investors.

Banks don’t like to take big risks. Banks loan money to people and businesses that will be able to pay them back and usually want some type of collateral in return, like a property or inventory that can be sold off if the new business fails.  Since most new businesses fail, they are usually unwilling to lend money to risky business startup ventures.

Professional investors, like angels and venture capitalists, are willing to take much greater risks than banks and even expect that many of the businesses they invest in will fail.  In return, however, they are looking for the next big thing – like Uber, Airbnb or Snapchat.  Professional investors tend to invest larger sums of money into a few business opportunities and expect that at least one of them will hit the jackpot.  Because of this dynamic, it’s difficult for most people to even get their idea in front of this group of professional investors, and even more difficult to get an investment.

As shown below, crowdfunding fits nicely between family and friends and banks and professional investors as a method to finance new business opportunities.   It gives you access to a wider pool of money than is available from your personal savings and friends and family, but it does not require the rigor and payback requirements of banks, angel investors and venture capitalists. 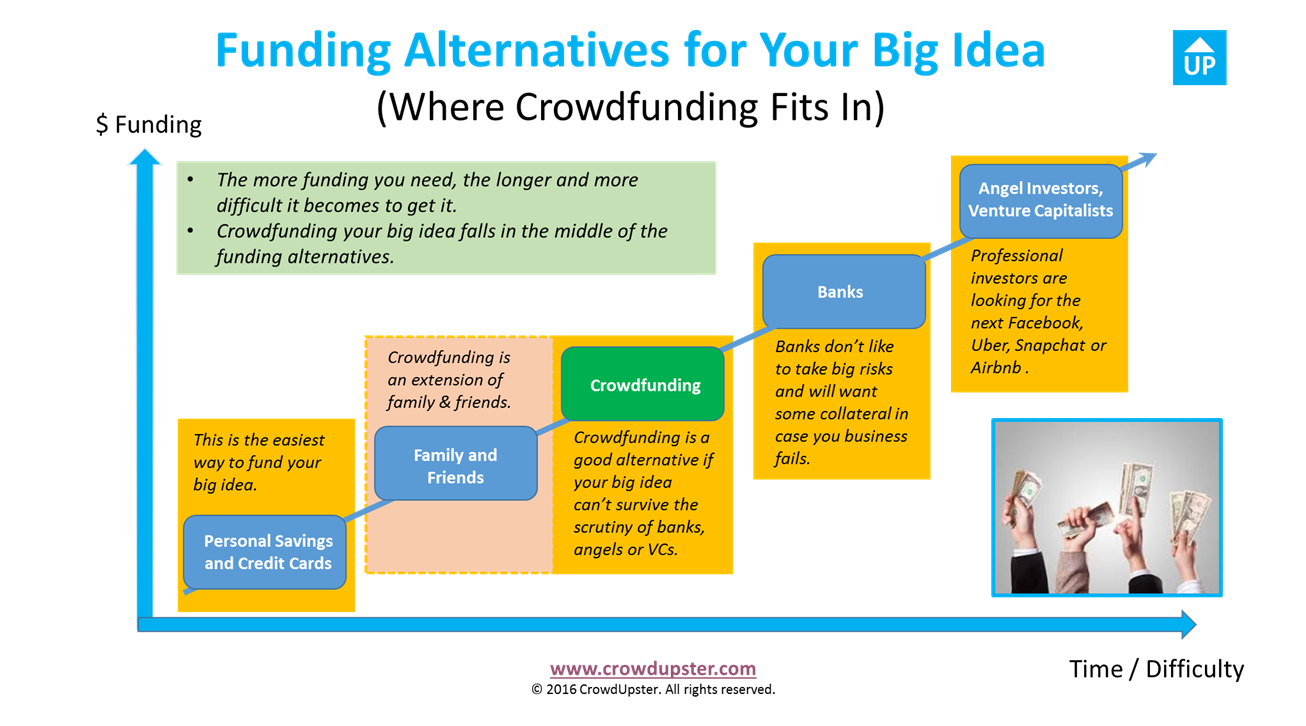 Crowdfunding expands your potential pool of investors (or backers) through social media outlets, like Twitter, LinkedIn and Facebook.   That means you already have those networks set-up and active prior to running a successful crowdfunding campaign.  While crowdfunding platforms may draw in additional investors or backers to your campaign, you should not expect that those incremental investors will help you achieve your initial funding goal.  Think of them as helping you exceed your funding goal or as the “icing on the cake.”

Choosing the Right Type of Crowdfunding for Your Opportunity

There are four types of crowdfunding that are widely in use today, and you must choose the one that best suits your needs.

Rewards based crowdfunding has become very popular in recent years and is closely associated with two of the most popular platforms in the industry: Indiegogo and Kickstarter.  With rewards crowdfunding you offer your “backers” an incentive or reward in return for their monetary contribution to your project.  For instance, you might offer anyone that contributes to your crowdfunding campaign a free or deeply discounted product at launch.

Donation based crowdfunding is typically used by individuals and non-profit organizations that are seeking donations for a particular cause.   You can use donation crowdfunding to help people with life threatening medical problems, raise funds for disaster relief or other charitable initiatives.  You don’t offer a reward with donation crowdfunding as all of the proceeds go to helping someone in need.

Equity based crowdfunding is used by companies to raise capital to fund their business plan.  In exchange for receiving capital from investors, the company gives up a percentage of its business based on the amount of the investment.  In effect, you are selling a piece of your company to investors who will be entitled to a future share of your profits.  You would use equity crowdfunding to raise larger amounts of money than would typically be associated with a rewards based campaign.  Also, you can expect a higher degree of scrutiny into your financial statements and plans than you would get with rewards crowdfunding.

Debt based crowdfunding is also used by companies to raise capital to fund their business.  However, instead of giving up any ownership to investors, these companies are obligated to start paying back the loans over a pre-determined amount of time with interest.  You would use debt crowdfunding in the same manner in which you might apply for a bank loan or credit card, and understand that there is an expectation by the lender to be paid back on time.

Is Crowdfunding Right for Your Big Idea?

Crowdfunding may be the right path for you to finance your big idea if you don’t have enough in personal savings.  Even if you do have enough in personal savings, crowdfunding can be right because it will validate your idea.  If you can’t convince people to invest in your idea before launch, then the probability that they will buy it post launch is definitely lower.  A “build it and then will come strategy” in business is a risky proposition.

In addition to validating your idea, crowdfunding offers many other benefits that you can read about here Crowdfunding Benefits.