Superscreen is an accessory for Android and iOS smartphones that allows users to control and view their smartphone content on a big HD tablet sized screen.  The super screen was created by Transcendent Designs and is a 10.1 inch HD display that turns a smartphone into a tablet, weighs less than 1 pound, has front and back cameras, built in hi fidelity speakers, 12 hour battery life, and is Bluetooth compatible.  The Superscreen does not require WiFi to operate an Apple or Android smartphone. 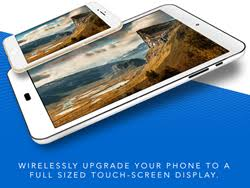 Superscreen was created by Brent Morgan, who has been a member of BackerClub since 1994 and holds 49 patents in the USA and overseas, and this is his first crowdfunding project on Kickstarter.  Brent also founded Transcendent Designs in 1994 to develop new solutions for multiple industries including tech, medical, and military organizations.

The Superscreen is synched to a smartphone using Bluetooth and an app download.  If certain apps are not supported by the super screen, then developers can get the Superscreen SDK.

To date, Superscreen HD tablet screen has raised $1,448,357 from over 12,000 backers through a Kickstarter fundraising initiative.  The super screen company started fundraising on March 20, 2017 and reached its fundraising goal of $50,000 on March 21, 2017. Transcendent Designs made stretch goals including a neoprene carrying case for reaching $250K in funding and extended life battery for reaching $1.5M in funding.

Transcendent Designs made the following rewards for supporters:

Transcendent Designs is located in Santa Monica, California and was launched by Brent Morgan.